In 1979, Andy Warhol spent two days in Chicago and although it wasn’t a secret trip, it may have been long forgotten if not for an 18-year-old fan from Northbrook.

Raúl Niño, who at the time was attending New Trier West, would frequently hop on the El to head downtown and roam around, taking pictures. A big fan of Warhol, he had read his 1975 book “The Philosophy of Andy Warhol” and was a subscriber to Warhol’s Interview magazine by the time he learned that his hero was coming to Chicago and knew that he had to see him.

Warhol was scheduled to do a book signing at the long-gone Kroch’s & Brentano’s bookstore on Wabash Avene to promote his book “Andy Warhol’s Exposures” and would also make an appearance the day after at Fiorucci, a new wave clothing boutique that Niño spent a lot of time at, getting to know people in the scene like Joe Shanahan, who worked at the store in the days before opening Smart Bar and Metro.

Shanahan and Niño would remain friends over the years and a chance meeting a few months ago at their mutual friend Jason Pickleman’s Lawrence and Clark art gallery led to the first public showing of Niño’s pictures from when Warhol visited Chicago in 1979.

Bob Chiarito from The Chicago Ambassador recently talked to Niño, now a poet who works by day as a librarian at Northwestern University from his home in Evanston. 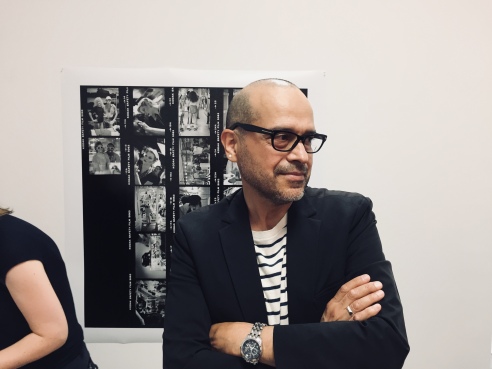 Raúl Niño at the exhibit opening. Photo by Iñigo Manglano-Ovalle

CA) How were you able to take pictures of Andy Warhol when you were 18?

NIÑO) I was a student at New Trier West, which is what New Trier was called back then, taking a photography class and learning to take pictures with an SLR camera. I was a big fan of Andy Warhol. By that point I had read ‘Andy Warhol’s Philosophy’, I was a subscriber to Interview magazine, and I loved everything to do with that scene. What I would do was cut a lot of lawns, clean a lot of gutters, I made pizzas at Jake’s Pizza in Glenview, all to earn money to be able to do things that I wanted to do. Photography was my passion at the time. I’d take the El from Wilmette to the city on weekends and wander around. I discovered by accident the clothing store Fiorucci, not long after it opened in Water Tower Place. I had seen an ad for Fiorucci’s New York shop in Interview magazine so when they opened in Chicago, I started going there and would just hang out. I’d go there on a Saturday morning and would literally spend the entire day there. The owner, Paul B., was cool with it because I was a kid, I was harmless. And I was really polite. I’d ask if I could take pictures and they would say yes or no but I’d always preface it by saying that it was part of a school project so of course they wanted to help a student. I became a fixture at Fiorucci. I was there one day and found out that Andy Warhol was going to come there on a Saturday. And then Irv Kupcinet or some other gossip columnist wrote that he was going to be at Kroch’s and Brentano’s the day before. I thought, ‘Wow, I have to go. This is Andy Warhol, my hero.’

So I ditched school on Friday and I went to the bookstore and shot a roll in black and white. The next day I shot a roll at the store in color and that was it. I took those pictures and managed to develop the black and white pictures and sent the color film to a lab. I put them in a sheet and that was where they remained. I’d show them to friends over the years but that was about it. I continued to go to Fiorucci until they closed about 18 months later. They didn’t last because they were way ahead of their time.

CA) How did the current show come about? You are a friend of Jason Pickleman, correct?

NIÑO) Yes, I met Jason many years ago and would see him at art events. He had told me about his gallery and I finally went. On the second or third time I was there, Joe Shanahan, the owner of Smart Bar and Metro was there talking to Jason. I know Joe because he worked at Fiorucci many years ago. That’s where I first met him and he was really nice to me when I was a kid. Joe worked at the espresso stand at Fiorucci. It was a really funky store. The employees smoked cigarettes on the job in the store. They drank champagne. They did other things that were illegal but I never knew about. Joe worked the espresso stand and I would hang out there and get wired. Joe would tell me about things going on. He took me to lunch one day to Hamburger Hamlet.

I related all this to Joe when I saw him there a few months ago and we went down memory lane.

To promote the show, Niño wrote a poem and allowed The Chicago Ambassador to reprint it here:

That was me. A Friday and a Saturday.

In black and white, and in color.

Are memories black and white?

Or do they come in color?

Interview magazine came in both.

Fiorucci was all color all of the time.

Friday was in black and white, all business.

Saturday was in color, a party.

Andy Warhol was very quiet, but then so was I.

A picture is worth a thousand words,

these are just a few.