Tim Kerr, the 61-year-old co-founder of the Austin hardcore band Big Boys, has made a name for himself as a punk rock pioneer and also as a painter showing around the world.

His band, perhaps the first punk band to infuse funk into its sound — heavily influenced bands like the Red Hot Chili Peppers, who once opened for Big Boys. But it’s his art, which he feels is one and the same with his music, that is bringing him to the Chicago area starting this weekend for an exhibit titled “YOUR Name Here” at his friend John Maloof’s Skokie gallery, Miishkooki.

Kerr colorfully paints historical figures on various materials such as maps, skateboard decks, and cardboard. His goal is to make people think and get them to “Do something,” as have the subjects in his paintings.

Bob Chiarito of The Chicago Ambassador talked to Kerr on the eve of his opening about his work, his friendship with Maloof — who he met because of Maloof’s work on the famed Vivian Maier photos, and what his DIY attitude and efforts to help others in the art scene.

CA) I read that you consider your painting and your music one in the same. Can you explain what you mean?

KERR) All of us have self expression. Some do it with clothes, music, art, writing, skating, but it’s all coming from the same place. I’m not stupid, I understand why people separate it, but to me it’s all coming from the same place. I did a mural in New York and one thing that I did with it was to put the lyrics of the Curtis Mayfield song Keep On Pushing on it. The idea was that if you’re looking at the piece and you recognize those words, you’re going to hear the song in your head and have a soundtrack while looking at it, which is pretty great.

CA) Hypothetically speaking, if you had to choose painting or music, could you?

KERR) I don’t know if I could. Music is everywhere. Even if you’re not playing, you can hit your hand on your knee and get a rhythm going. You can always sing. I do what I’m doing because it’s like breathing to me. Whether people are listening or looking at my art or interviewing me about it like you are — I’d still be doing it. So it’s not a this or that type of thing.

CA) How many pieces do you have in the show?

KERR) There’s a lot. I like the idea of people walking in and being overwhelmed. There’s 119, plus a wall that has friends’ art. I usually always do a friends wall because the one thing that I think is missing from the art scene is that nobody shares anything. It’s not like when the hardcore music scene started. We all shared. We shared members, places to stay. It was a real community. In the art world everyone holds their cards so close, it’s not the same at all. So I have given space to friends to do art. 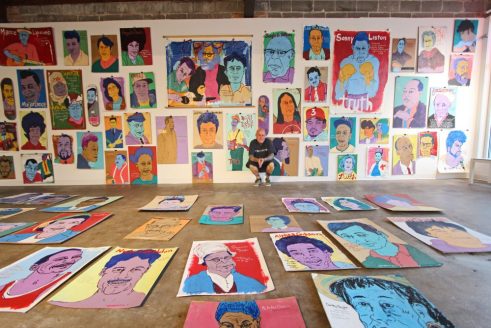 Getting ready for his exhibition at Miishkooki.

CA) Most are historical figures? I noticed Harriet Tubman and a few others.

KERR) Yeah. It’s more about the idea of people doing something — not to be famous or to make money, but doing something because that’s what they have to do. It doesn’t matter if it’s sports, music, civil rights, whatever. It all comes from the same place. I hope the viewer sees it and realizes ‘I can do this, I can do something.’ It’s the same sentiment we had with Big Boys. ‘We can do something.’

CA) I saw that you have one of Vivian Maier — was that because of John Maloof?

KERR) Well, the way I met John, usually I’m not starstruck, but when someone is doing something that you like and appreciate and you see that they are putting a lot into it, I think you ought to thank them. So, I saw the stuff about Vivian Maier before the documentary. Someone sent me a link to the news show about it [Chicago Tonight]. I donated to his Kickstarter and wrote to him to thank him for his work. Then I started painting her pretty soon after that because I thought, ‘Holy Shit, people need to know about her.’ That’s another thing I do — I’ll paint someone to start a conversation and hope that people look them up to learn more.

At some point after I wrote him to thank him, John saw a skateboard that I had painted and he wrote to me, asking if he could buy one. I gave him one and then every couple months or so we’d write to each other. Then when he opened this gallery [Miishkooki] I said we should do a show and here we are a year later.

CA) Are you still playing music or just focused on your art?

KERR) Yeah. Really the last 10 or 11 years I’ve been playing Irish traditional stuff on an accordion. I also started playing Olde Time music with banjos. My band Monkey Wrench got together to play a couple gigs last year including a gig to raise money for an elementary school art program.

CA) How long are will you be in Chicago?

KERR) We are leaving Sunday afternoon, but we may end up being here until Monday because of the hurricane. We won’t get the brunt of it in Austin but it may effect air travel.

Tim Kerr’s opening of “YOUR Name Here” will take place Saturday at 6 p.m. at Miishkooki, 4517 Oakton Street, in Skokie and run through September 22. For more information, click here.