Ten long years after being kidnapped and taken to Ghana by her grandparents,  15-year-old Christina Gunn was reunited with her mother in Atlanta Tuesday afternoon.

As previously reported by The Chicago Ambassador, Christina was 5-years-old when her mother, Ivy Davis, allowed the parents of her ex-husband to take her on what she thought was a two-week trip to Ghana.

Davis described the events leading to Christina’s return as “happening so fast that it is hard to believe.”

Davis said her daughter’s grandparents recently left Ghana to go on a trip, presenting Christina with the rare opportunity to run away. Davis contacted the U.S. Embassy in Ghana, who helped get her daughter a passport, and bought her a one-way ticket home from Ghana yesterday.

“The opportunity finally presented itself,” Davis said. “She worked up the courage to do it. It all happened so fast. On Friday we talked about it, Monday it was happening.”

Christina was driven to the U.S. Embassy and to the airport in Ghana by a driver who worked for her grandparents and with whom she became close with.

“Christina said his family always looked out for her,” Davis said. “When her grandparents got mad at her and would starve her for punishment, they would bring her food, so she’s real close with them. They took her to the Embassy where she got her passport. I went to the airport yesterday [in Atlanta] and purchased her flight. ”

Christina flew from Ghana to Amsterdam Monday and after a layover, landed in Atlanta about 1:30 local time Tuesday.

She was met at Atlanta’s Hartsfield-Jackson International Airport by her mother, grandmother, and her half-sister Lauren Elise,  who she only met one time during a 2-day visit in 2003.

After reuniting, Davis again spoke to a reporter and shared her excitement.

The first stop from the airport was at a department store buying clothes because Christina came with only the clothes on her back.  Davis added that they would be visited by family members today to celebrate the return of Christina.

Exclusively covered by The Chicago Ambassador, Christina Gunn, now 15, is the daughter of Ivy Davis and Raymond C. Gunn. She lived in Ghana with her grandfather, Raymond F. Gunn and his wife Ayesha Hakeem since 2009, only returning home to visit a couple times, the last being in 2013. Both the elder Gunn and Hakeem are former Illinois attorneys.

According to Katherine Haskins Becker, attorney for Ivy Davis, this is a story about a poor, young mother who was continually been failed by the system.

Davis and Gunn met in 2002 after she ran away from a group home in North Carolina when she was 15 and he was 21. Soon after, Davis became pregnant with Gunn and he convinced her to move to Olympia Fields, where he resided with his family. They were married in 2003, by his lawyer father Raymond F. Gunn.

Over the next 8 years, the marriage had its ups and downs, with Davis ultimately moving to Georgia with her young daughter to be close to her mother, two years after being married. In 2009, Raymond filed for divorce and was awarded custody of their daughter. Davis, who did not have the resources to hire an attorney, represented herself and claims that she was bullied by the court system and her husband’s attorneys. According to the original divorce decree, the child’s father was to have sole custody, with Davis getting supervised visitation for the first 18 months, provided she post $5,000 bond. During the divorce proceedings, which lasted from 2009 until 2011, there were no allegations made against Davis’ character or other factors that usually would cause a mother not to be given at least joint custody of her child. After a legal battle, Ivy Davis was granted sole legal custody of Christina in June of 2015, despite the fact that she was illegally in Ghana until yesterday.

Christina was first brought to Ghana in January 2009, after Davis was led to believe that her daughter was going to visit her ex-husband’s father and his wife Ayesha Hakeem for three weeks. Since then, Davis has only seen her daughter on a couple occasions, the last being in 2013, when Raymond F. Gunn and Hakeem brought her back for a two-day visit, Davis told The Chicago Ambassador in June 2015. Through her lawyer, she declined to be interviewed about recent developments.

When asked why Davis allowed her daughter to return to Ghana after seeing her in 2013, Haskins Becker said that she had no choice.

“She did not have custody of Christina [at the time] and could have been arrested for defying a court order,” Haskins Becker said.

Davis added that during that 2-day visit in 2013 was the only time Christina has ever met her other daughter Lauren Elise, who is now 7. 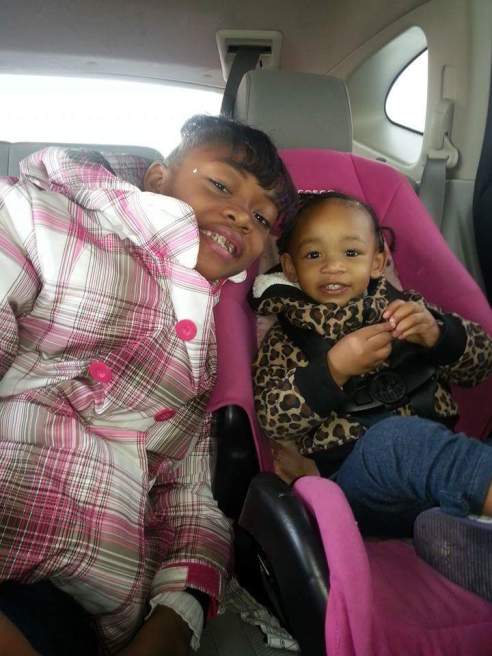 Christina Davis and her sister Lauren Elise in 2013, the only time they ever met until today.

Christina Davis and her sister Lauren Elise on Tuesday, reunited.

Davis told the court in June 2015 that she also was concerned about Christina’s safety.

Over the last few years, Davis has battled in court to get her daughter back, and has won some legal battles but none that have produced the return of Christina. In June 2015, County Circuit Court Judge Jeanne Cleveland Bernstein awarded Davis sole custody of Christina and ordered Raymond C. Gunn to Cook County Jail in contempt after he failed to follow a previous order that his daughter Christina be returned to Illinois. Her order was affirmed by the First District Illinois Appellate Court in June 2016.  Because of the order, Raymond C. Gunn was held in Cook County Jail from June of 2015 until November 2 of 2016, all the while Christina remained illegally in Ghana with her grandfather and his wife.

At the time, Davis told The Chicago Ambassador that while she did not want the father of her daughter in jail, his release was in his control – send for their daughter and he would be released.

In an interview with The Chicago Ambassador from Cook County Jail a few weeks into his incarceration, Raymond C. Gunn said he was prepared to sit in jail “as long as it takes to ensure that my daughter is getting a great education and being cared for like she is.”

Asked if he missed his daughter, he said “Yes, but she’s getting a great education. She knows four languages and is a star student and is being taken care of by my family.” He added that his father and Hakeem “will not throw Christina to the wolves to save me.”

In 2016, after the release of Raymond C. Gunn by Cook County Circuit Court Judge Patricia Logue, Haskins Becker said they lost their leverage and with that, much of the hope that Christina will ever be brought back home. All that has changed as of yesterday.

At the time, Haskins Becker said Davis was upset and conceded the chances that she will get her daughter back appeared bleak.

“Ivy is devastated, her daughter isn’t back. The goal was never to have her daughter’s father sit in jail, it was to get her daughter back.  She added they fear that Raymond C. Gunn will flee Illinois as he did in the past.

Becker Haskins added in 2015, “We haven’t given up and will continue to fight for the return of Christina.”

On Tuesday, perhaps because of a once in a lifetime opportunity rather than a legal victory,  what seemed like a dream for Davis became a reality.

See photos from today’s event below:

Read our initial story about this case (2015)

Listen to Rivet Radio’s interview of Bob Chiarito and attorney Kathlerine Haskins Becker about this story!