Alex Kotlowitz is back with his fourth book, newly released An American Summer, Love and Death in Chicago. The engrossing book focuses on one summer in Chicago and the individuals who emerge from the violence and whose stories capture the capacity of the human heart.

Best known for his 1991 best-selling There Are No Children Here: The Story of Two Boys Growing Up In The Other America which was selected as one of the most important books of the twentieth century by The New York Public Library and is still taught in high schools and colleges across the country.

An American Summer revisits gun violence (a subject that he’s often focused on since in various magazine articles and in The Interruptors, the 2012 documentary he made with filmmaker Steve James) —yet he says the interviews for the new book were the hardest of his career. That, and more was the topic of discussion between Kotlowitz and Bob Chiarito of The Chicago Ambassador recently. 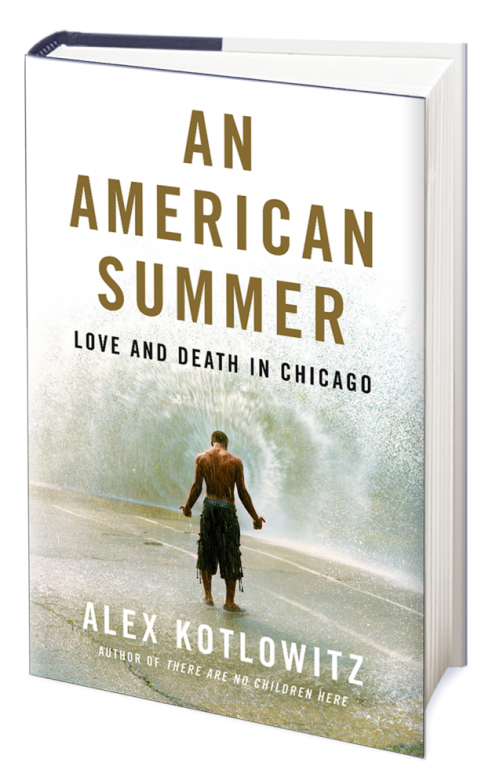 CA) The one thing that people may get wrong. I’ve heard you say this, that Chicago is more of a setting, it’s not necessarily a book about Chicago. It’s a book about the U.S.

KOTLOWITZ) Right, that’s right. That’s why I call it An American Summer. The stories obviously are particular to Chicago, but it is the story about where we are as a nation. I could have written this book in any number of cities.

CA) I’m guessing because you live in Oak Park, it was easier for you to do it in Chicago?

CA) Chicago is often the focus of media attention. But, as you point out in the book, it’s not even in the top ten of murder rates. Do you think that focus kind of gives or exaggerates the bad reputation that Chicago has?

KOTLOWITZ) I don’t think anything can exaggerate the toll the violence has taken in this city. And, to be fair, while we are not in the top ten or even in the top fifteen, in terms of whole numbers because of the size of the city we have considerably more [homicides] than any other city. Chicago is known for the persistence of violence as it should until we find a way to grapple with it.

CA) I found it interesting that you said the interviews you did for this book were the hardest you have ever done. I thought that said a lot, considering how much you’ve written on the subject for decades.

KOTLOWITZ) Right. Well, they were really hard. I was talking to people about what was the most distressing, disturbing moment in their lives. That was difficult. I was asking people to open up in some ways that I hadn’t asked of others. Just the terrain itself, dealing with unexpected loss, so yeah, they were hard.

CA) You wrote There Are No Children Here in 1991, so it’s been more than 25 years. Do you think in 25 years from now you can write another book about the same problems? Do you see the problem remaining?

KOTLOWITZ) I think for me the thing that’s the most sobering in some ways is how little things have changed in those 28 years. As I point out in the book, violence as bad as it is now is not as bad as it was then, but the shape of the violence has changed. For me, the thing that is really sobering is that many of these neighborhoods that I spent time in feel as distressed as they did nearly three decades ago, if not worse. I just kind of shake my head and ask where’s everybody been?

CA) You’re not pushing any type of solution but how much do you consider yourself an advocate rather than a journalist?

KOTLOWITZ) I’m a storyteller. I write out of a fundamental sense that life ought to be fair, it ought to be just. Most of my stories land on people or communities where life isn’t fair, isn’t just and there is no question that I write out of that fundamental sense. It’s who we are as a country, I don’t think it’s anything terribly radical and yet, it’s not something we talk about all that often. So, no, I’m not an advocate. I’m a storyteller. I hope my stories get people to look at themselves and the world just a little bit differently.

CA) There are some stories in the book that the reader may be familiar with. We meet Eddie Bocanegra who we first met in The Interruptors, Peter Nikeas from the Chicago Tribune and Spencer Leak Sr. from Leak and Sons Funeral Home — both of whom have been written about — but then you have a story about Calvin Cross and Joshua Jones, who were both killed by police at the same spot six years apart —

KOTLOWITZ) Right. The Calvin Cross story for me is just chilling and it’s one of the stories in the book that left me really angry.

CA) And there’s a lot of areas of grey in the book. You write about Lisa, whose son Darren was killed by Mike, but it could have easily been the other way around.

KOTLOWITZ) Right. The blurring of victim and perpetrator, that happens a lot. You certainly see that in that instance and also the heart of that story was the notion of forgiveness, which finds its way into many of the stories. Also, this idea that too often when people are killed in this city we identify them as a gang member or by their criminal record. This notion that somehow what goes around comes around and it doing an incredible injustice to the people that are the victims of the gun violence.

CA) I thought your story about Jimmie Lee was interesting and you pointed out to him that when he was younger, the violence was a lot worse. He said it feels worse now and that seems to be the feeling of a lot of people. Why do you think that is?

KOTLOWITZ) I think there are a number of reasons. Back then, so much of the violence was out of sight, out of mind to the public. The other thing is back then, a lot of the violence was organized around the drug trade, so it was really directed. I always remember that when we were working on There Are No Children Here, we’d actually get warning before somebody would start shooting. But now the gangs have broken apart, there are anywhere between 600 to 800 cliques or crews organized block by block. The violence seems more arbitrary, often over petty disputes and so it feels more random. Public housing is down, so the violence has moved out into the neighborhoods. So, that’s what I mean when I say the shape and the character of the violence has changed. And it does, it feels as intense, if not more so than it did back then.

CA) Towards the end of the book, you talk about Edward, a gruff guy who is in a wheelchair as a result of gun violence. He tells you “Don’t forget about me.” Why do you feel it’s important for people not to forget about these people?

KOTLOWITZ) Well, they are neighbors. This is the great paradox of our country. We like to think that we’re all in this together, yet we lead such disconnected lives. Chicago, like so many other cities, is so deeply segregated. We’re segregated by race, by class, so for many in this city they have no reason to spend any time in these communities, no reason to get to know people living in these neighborhoods. So, while everyone is concerned about the violence, there is this glib notion that shit happens and people move on. But the numbers are staggering and the violence shapes people and they work really ferociously from keeping it from defining. It seems so self evident. Of course we should care about them, they are our neighbors, just as we would care if we lost a loved one ourselves.

CA) You emphasized the point that the stereotype for people living in these neighborhoods is that maybe they get used to it, but Eddie says at one point that “This stuff stays with you. It fucks with you.”