For years, Morello has been among one of the country’s most outspoken artists, but as he told The Chicago Ambassador — “If you music isn’t good, no one gives a shit what you have to say.” For Morello, that hasn’t been an issue, having been ranked number 40 in Rolling Stone magazine’s list of the “100 Greatest Guitarists of All Time”

After dropping an EP in 2016, the group just released their first album, a self-titled, 12-track offering which rails against the government and is in Chicago to play Riot Fest in support of it.

Morello,who grew up in suburban Libertyville, is also a die-hard Cub fan. In fact, aside from playing Sunday, Morello told Bob Chiarito of The Chicago Ambassador that his main goals this weekend were to attend a Cub game and get some pizza. That, and a few other topics were addressed in an interview Friday, two days before Morello’s band makes their Chicago Riot Fest debut. 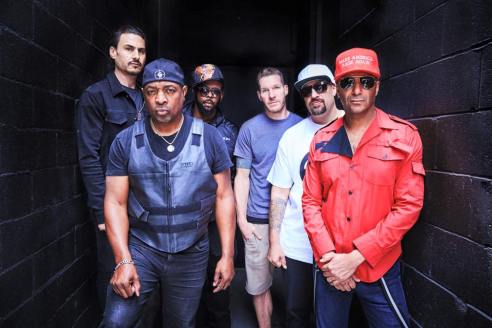 CA) If Donald Trump didn’t run for president in 2016, would Prophets of Rage had formed?

MORELLO)  His candidacy definitely contributed to our formation, but it was more than just Trump. We wanted to do something instead of just Tweet about it.

CA) Rage had predicted it in its Sleep Now in the Fire video going back to 1999, so when it actually happened were you surprised at all?

MORELLO) Back in 1999 it was an amusing joke. It’s not so funny anymore.

CA) Michael Moore directed that video and the video of the first single for Prophets of Rage — “Unfuck the World.” I’m guessing you’re mutual fans?

MORELLO) Definitely. In the world of film and documentaries and broadway artists, he’s one of the best.

CA)With all due respect, yourself, Chuck D and B-Real have been around for a long time. Who of the younger generations of musicians is picking up the bataan that you guys have carried for so long?

MORELLO) We are the only ones really doing it.

CA) You’ve cited Public Enemy as an influence for years. What’s it been like working with Chuck D?

MORELLO) It’s been great. B-Real is in that same category.

CA) Do you foresee a day that you’ll have nothing to rage against?

MORELLO) It’s important to note that we are musicians first and foremost. If your music isn’t good no one gives a shit what you have to say. But to answer the question, no. There are many issues that go beyond Trump that need to be addressed.

CA) Do you stay in touch with Adam Jones? [His Libertyville High School classmate and Tool guitarist]

MORELLO) Yes, we email every couple of months.

CA) Rage Against The Machine broke up in 2000 but reunited in 2007 for 8 shows. Any chance you’ll reunite again one day?

MORELLO) There are no plans for that. I’m focused on Prophets of Rage for the foreseeable future.

CA) So this will be more than a one-off project?

CA) Do you think our Cubs have a decent chance to repeat this year?

MORELLO) Absolutely. Although I’m still riding high from winning last year. I never thought I’d see that in my lifetime. We are going to get some pizza and then will be going to the game today.

2 Responses to “Tom Morello to rage at Riot Fest”