A column by Bob Chiarito.

Whether or not President Donald Trump’s personal meetings and phone calls to former F.B.I. director James B. Comey constitute obstruction of justice can be argued about by the lawyers. I’m not a lawyer and I’m not sure if there is enough to prove obstruction. I am a Chicagoan however, and like most Chicagoans, I know when someone is trying to strong-arm.

It doesn’t take a rocket scientist to figure out what Trump was trying to do. One of his inner circle — former national security director Michael Flynn was under investigation for his ties to the Russians and needless to say, this is not good for the Trump presidency. So, he did what has been done for ages, he tried to leverage his power over Comey to stop the investigation. This is nothing new with people who have power, and it’s certainly nothing new to Trump, who has skirted ethics, if not the law, for years.

If you’re skeptical, ask yourself these four questions: Why was Trump always initiating the conversation, be it by personal phone calls or highly unusual one-on-one meetings? Why was Comey compelled to take notes after every meeting with Trump when he never did that with anyone else? Why did Trump continually bring up Comey’s job when he had a 6-year appointment? Why did he ask attorney general Jeff Sessions to help prevent any future direct communication between the president and himself?

Since the testimony, Trump supporters have been clinging to the fact that Trump told Comey that he “hope [d] you can let” the investigation “go.” Their argument is that the word “hope” exonerates Trump. That he simply stated how he felt. That it was by no means an order or an act of intimidation.

It’s a Hail Mary attempt at saving face for Trump when Stevie Wonder could see what’s been going on. Clinging to the word “hope” ironically may be the only hope Trump has. It’s the type of weasel tactic that isn’t unique to Trump or to Republicans. Remember Bill Clinton’s famous question asking what “is” means?

Women, the smarter sex, are very familiar with this sort of behavior. As pointed out by a Tweet from Democratic Congresswoman Maxine Waters and a fine op-ed recently in the New York Times by Nicole Serrate, for a lot of women Trump’s dealings with Comey was very familiar to situations they have experienced where men have power they can abuse — and where they have done just that.

The key thing that will continue to be debated is the use of the word “hope” and whether or not Trump tried to intimidate. I think it’s obvious that he did intimidate, as evidenced by the fact that Comey, a career law man and a towering physical figure, also testified that he regretting not being “stronger” about responding more assertively and told the president that he was acting inappropriately.

As for the use of the word “hope,” it may be relevant in a court of law, but here in Chicago, it’s obvious.  If you ask me, Trump actually said a lot more than most harassing boss ever says to a female victim, more than any crooked Alderman says to a homeowner who needs new garbage cans, and more than any mob-connected jerk who “advises” a Chicago tavern owner to install his juke box.

I was interviewing Stuart Dybek today about his writing and this topic came up. Dybek, probably Chicago’s best living writer, is no stranger to the laws of the streets. He reminded me of the difference of insurance and protection: A guy comes into a new shop and advises the owner that he needs protection. The owner, a newbie, says he already has insurance. The guy explains that insurance is to replace or repair something in case something bad happens. Protection is to make sure nothing bad happens. Most people know this distinction and don’t need it spelled out, just as Comey didn’t need Trump to clarify what he wanted any more than he did. Here in Chicago, strong-arm tactics were common for years, both from the Outfit and from corrupt city officials. And while the Outfit may be largely dead, sexual harassment is still alive nation-wide, and corruption is still alive in Chicago. Take the story of restaurant owner Cesar Izquierdo.

Izquierdo is the owner of Taste of Peru, a great restaurant at 6545 N. Clark St. in Rogers Park. He’s owned and run Taste of Peru for 19 years now and is a positive force in the neighborhood. Before Taste of Peru, Izquierdo said the place was a 24-hour diner that was a hangout for the Black P-Stones. Along with serving fresh seafood and what’s been called the best paella in town, Izquierdo has been involved in CAPS and done more than his part to clean up the neighborhood. He ran Taste of Peru for 14 years without a problem, until one day in September 2011. That was when Chicago health inspector Charity Okoro paid a visit.

Izquierdo was no rookie to inspectors. His restaurant was inspected at least twice a year since he opened without being cited. So he knew something was different when Okoro came in yelling at the cook for not wearing a hair net. Izquierdo said his cook shaved his head and there was no need. Okoro continued, finding “violations” where no other inspector had found violations during the 14 years he was open until then. 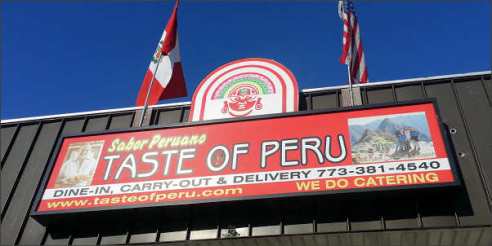 During the inspection, Okoro was “really mad, really screaming,” Izquierdo said. That is, until she noticed that Izquierdo walked with a limp because of a back injury. She also noticed that his brother (who since died from cancer) was there and didn’t look too well. She wrote $500 worth of tickets for various violations (one was for cross-contamination for leaving an open can of beer, used for cooking, next to an uncut avocado). But she also suddenly mellowed out and stopped inspecting, assuring Izquierdo that she could “fix you up.”

She then returned the next day, telling Izquirdo that she was off the city clock and wanted to talk to him about vitamins that could help him and his brother. (She had a second job that she never disclosed to the city).

Okoro wasn’t bigger or smarter than Izquierdo, yet she intimidated him, telling him at one point during the sham inspection that she could shut him down. To a restaurant owner, that’s the kiss of death. Whether the violations are legit or not, if the public learns that you’ve been shut down because of health violations, you better start looking for a new career.

So, Izquierdo did what most would do. He bit his tongue and bought almost $400 worth of vitamins from her. In fact, several other restaurant owners later alleged the same thing happened to them when dealing with Okoro. Interestingly enough, after Izquierdo bought the vitamins she told Izquierdo and his wife, Julie, the date of the reinspection and assured them everything would be fine.

And everything was fine. Okoro didn’t even go into the kitchen during the “reinspeciton” but issued Taste of Peru a passing inspection. Seemed the only thing the vitamins cured was the failing inspection.

Two months later, Julie Izquierdo reported the incident to an administrative law judge and an investigation led to Okoro’s resignation. In the five years since his ordeal with Okoro, Izquierdo said Taste of Peru has not received any citations, just as it had not in the 15 years before she walked in.

I talked to Izquierdo a couple times since the Comey testimony, by phone and in person. Izquierdo only saw highlights of the testimony because he was working, but he was familiar with the same type of intimation. He lived through it and prevailed. To Comey’s credit, he may have felt that he wasn’t strong enough to confront Trump, but he didn’t drop the investigation into Flynn. He may have been fired, but the FBI will go on and he’ll likely eventually write a tell-all and retire a rich man.

Whether or not there is now an investigation into Trump is unknown at the moment. I bet there is. In fact, it’s probably the safest bet I can think of –aside from the bet that anyone who believes Trump wasn’t trying to strong-arm Comey is on more than vitamins.