Chicago has long been home of the blues. It’s where musicians, largely from the Mississippi Delta, first plugged in their guitars (in a radical move) to create a new sound that eventually became Rock and Roll.

Along the way, there have been a few leaders whose work helped ensure that the Blues not only survived, but thrived. Willie Dixon, Phil and Leonard Chess, Bob Koester, Buddy Guy and Bruce Iglauer are among those who led the way to bringing the blues to the world.

Rock and Roll is in no danger of going away. It and its many fragmentations are the backbone of modern-day American music. The future of the blues however, is in question.

For 45 years now, Bruce Iglauer has been one of the pillars of blues music. The founder and owner of Alligator Records, through his label Iglauer has put out acclaimed recordings from a who’s who of blues over the last 50 years — Son Seals, Koko Taylor, Albert Collins, Lonnie Brooks, Luther Allison, Marcia Ball, Shemekia Copeland, Buckwheat Zydeco and many others.

The Chicago Ambassador caught up with Bruce Iglauer a few weeks before the 45th Anniversary of his record label is celebrated at Chicago Blues Fest.

Iglauer, a protégé of Bob Koester, talked to us about his hits and misses, what he sees for the future of the genre, and what the City of Chicago has done right and wrong for the music it showcases to the world. 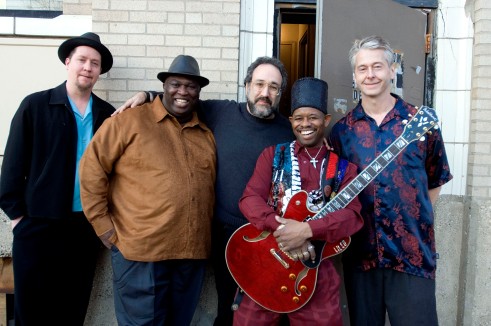 CA) When you began working for Bob Koester as a shipping clerk for Delmark in 1970, did you think you would still be working in blues music 45-years-later?

IGLAUER) When I began working for Bob, I was thinking I was spending a year in Chicago absorbing the blues scene before going on to graduate school (to study history of the theatre). I got ‘hooked’ quickly and thoughts of leaving Chicago were put on the back burner. I wanted to work for Bob, who was/is my mentor and hero, but eventually it became clear that I was too headstrong to work for anyone else, and once I started Alligator, my career was pretty much locked in. Of course, for the first ten years the label was always on the edge of failure, so it wasn’t until about 1980 that I felt fairly sure it had a future. Did I think about 45 years? Not really. It’s a surprise to me that it’s been that long, and it all seems to have happened very quickly.

CA) The story is that you started Alligator in 1971 to record Hound Dog Taylor after Delmark declined your advice? You actually continued to work for Delmark for a bit before working full-time for Alligator. What was your relationship with Bob Koester at the time and what has it been like through the years?

IGLAUER) The story about Bob turning down Hound Dog is true; he had never seen Hound Dog with his own band, only sitting in at jams. It was very hard for other musicians to follow Hound Dog, so his sets and jams were often musically chaotic. As that was all that Bob had seen, I understand why he passed. He was very tolerant of me when I started Alligator. He allowed me to take some business calls at Delmark, and to haul shipments of Hound Dog albums to the post office when I took the Delmark shipments. This continued from August 1971 (when he gave me three weeks off to travel and promote my record) until May of 1972, when he sat me down and said “it’s time for you to decide if you work for me or work for yourself.” When I chose to leave, he was very nice about it. Alligator isn’t the only label startup that Bob mentored.  Testament Records was started by a Delmark employee, as was Nessa Records, an exploratory jazz label. Bob also advised Rooster Blues and Flying Fish and several other labels.

Since I left Delmark, I haven’t seen Bob as often as I’d like. We’ve been sort of friendly competitors, but I’ve always been welcome at his home and office. I spoke at his 80th birthday party and it was a very emotional moment. Without Bob Koester and Delmark, there never would have been an Alligator.

CA) I’m sure there are others who came after you on the scene who would cite you as a mentor as Bob was to you. After you and Koester are done, who would you expect to lead the way (or, as you have said, be the bridge) for the blues in Chicago?

IGLAUER) I learned from Bob more by watching than by sitting down with him for advice. He was a dynamic boss, always in motion, usually doing 20 things at once, and with strong opinions about everything. I would have loved to find someone who wanted to learn from me like I learned from Bob. So far, that hasn’t happened. So, at the moment I don’t know who the next ‘bridge’ will be. I’d be happy for a young, visionary competitor. And this really applies to the blues nationally, not just in Chicago. There is room for half a dozen active labels, and they have not sprung up. Delmark, Severn, Ellersoul, Yellow Dog and a few others are putting out fine records. Blind Pig was just sold and probably won’t have many future releases (if any). Ruf, based in Austria, is very much at the rock end of blues (or the blues end of rock). Delta Groove’s owner died, and I’m not sure of the future of the label. There’s a big void in the blues recording world right now. 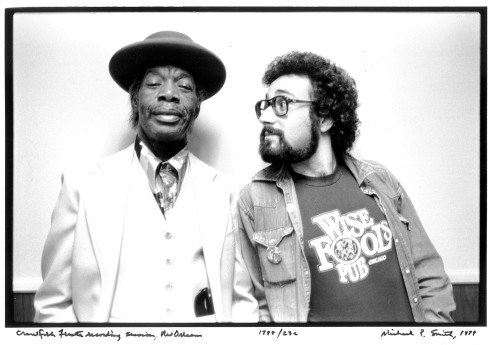 CA) You have recorded more than 300 albums at Alligator, with you producing or co-producing well over 100. There have been a lot of Grammy nominations and wins over that time. Can you name a couple favorite albums and artists?

IGLAUER) All my albums are like my children (maybe because I never had human children). So I have love for all of them. Right now my answers would be the artists you’d expect, like Hound Dog, Koko Taylor, Son Seals, Albert Collins, Professor Longhair, Lil’ Ed, some less heralded personal favorites like Michael Burks, Michael Hill’s Blues Mob and Corey Harris, and my ‘youngsters’ whom I’m hoping will write the future of the blues—Shemekia Copeland, Selwyn Birchwood, Jarekus Singleton and Toronzo Cannon. But tomorrow I might make a different list…..

CA) When considering whether or not to sign an artist to Alligator, what do you look for?

IGLAUER) Vision, passion, charisma and originality. I want artists who are grounded in the blues tradition but not trying to imitate or recreate what’s already been done. I want artists who can create original material or interpret songs in a fresh, contemporary way. I want artists who are driven to be blues men or women—as John Lee Hooker would say, “It’s in them and it’s got to come out.” And I need artist who can deliver live as well as in the studio. There’s nothing like a great performance to create new blues fans and excite existing ones, which will hopefully be followed by those fans wanting to own the artists’ music. 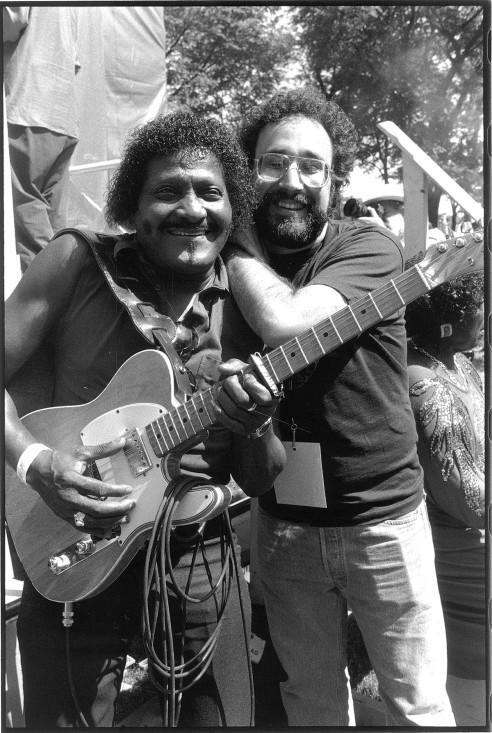 CA) Are there any artists that got away that you wished you had signed?

IGLAUER) I’m regularly ridiculed because I passed on the young Stevie Ray Vaughan as well as Robert Cray. I’m told I rejected demos by Keb Mo and Susan Tedeschi but I don’t remember them. So, I turned down four of the most popular blue artists of the last 30 years.

CA) As for the blues in Chicago, what has the city done right? Is there anything the city dropped the ball on – i.e., creating a blues district, etc.?

IGLAUER) The best thing (and it’s a huge thing) that city has done for the blues in Chicago and in the world is the creation of the Chicago Blues Festival, now in its 33rd year. It’s the world’s largest blues festival and of course it’s free. I’ve been involved with the festival from day one, first as chairman of the committee that booked the talent, and, after the city hired Barry Dolins, a blues expert, as a member of the advisory committee. This year the festival is honoring Alligator’s 45th anniversary and we’ll have a number of featured artists on Friday, June 10. (By the way, I think Chicago is the only major U.S. city that presents so many free music festivals in various genres).

Other than the festival, however, the city has done almost nothing to promote the blues (or much of any Chicago music) to the world. The blues clubs have to deal with the city’s complex and contradictory regulations in order to stay open and maintain their licenses. The city provides no directory of the clubs for tourists. The locations of famous clubs on the South and West sides are un-marked. The Department of Cultural Affairs and Special Events has a music office, but as far as I know, it creates no opportunities for blues artists. It would be great if all the conventions that come to the city were given information on creating Chicago music events for their attendees (these private events are often good paydays for musicians as well as great publicity for Chicago’s homegrown music). Some cities support their local music year around; others don’t.

CA) What’s your opinion on the future of the blues?

IGLAUER) I think the blues is at a crucial point in its history. With B.B.’s death and Buddy Guy, the only living internationally famous blues artist, now being almost 80, and no new crossover artists bringing new fans to the blues (as Stevie Ray, Clapton, Thorogood and others did in the past), it’s very hard to expand the audience. Way too many blues fan look like me, grey-haired or no-haired. For the blues to have a future, it needs new artists guiding the music. That’s why I am so excited about Alligator’s younger generation artists like Shemekia Copeland, Selwyn Birchwood, Jarekus Singleton, Toronzo Cannon (not as young as the others, but his vision is younger than his years) and Moreland & Arbuckle. They are creating blues that younger fans can relate to. For younger audiences to relate to the blues, the music needs to have beats that younger people know how to dance to, not the old shuffle and stomp beats that were the signature of the blues in the past. The lyrics have to tell contemporary stories, not the same old blues imagery. Of course songs of love and loss can last forever, but people want to hear stories about their lives, not their grandparents’. Blues doesn’t have to have 12 bars and three chords, or AAB song structures. For it to be blues, it has to be based in the blues tradition of real life songs, lack of sentimentality, and that ‘healing feeling’ that separates blues from pop music. So, right now, the blues has to evolve or become a museum piece, frozen in amber, like happened to New Orleans jazz. Alligator will keep trying to find and bring forward the artists who will take the blues into the future and keep it relevant and growing, and finding a new audience.