To describe Zainab Zeb Khan as an activist is just as limiting as to call her an artist. She is both, and also more than that. Born and raised in the Chicago area, with a father who emmigrated from Afghanistan, Khan has worked to fight for equal rights for women both in the U.S. and abroad. She has done so by supporting nonprofits, chiefly UNICEF with proceeds from her oil paintings, which often depict real stories and situations. By day, Khan is a clinical therapist working closely with survivors of domestic violence, particularly with the South Asian community in Chicago. She also has worked to end female genital mutilation and honor-based violence, leading to being featured in the documentary “Honor Diaries.” In addition, Khan gave a TED talk about her art, was chosen as a UN delegate to attend the 59th Session of the Commission on the Status for Women in New York in March, and was recently recognized as a leader for racial justice by the YWCA Metropolitan Chicago and is on the verge of launching her own group with a few others. Named MALA: Muslim American Leadership Alliance, the group is a civil rights non-profit organization that serves to recognize the United States’ bedrock principles of freedom, individuality, and pluralism with the Muslim American identity. MALA’s mission is to provide a platform for Muslim Americans to include their unique stories; mentor emerging young community leaders; develop constructive solutions to counter extremism; and advocate for international human rights.

Recently The Chicago Ambassador sat down with Khan to discuss her work and her art, which is one and the same.

CA) You are becoming more and more known as an artist and activist but during the day, you work with women in your capacity as a clinical therapist, correct?

KHAN) Now I’ve been shifting away. I saw the problems were much larger than with just individuals. That’s where my work started and I started reaching out to a lot of global and national groups. I started with art… I also saw that there is a pressing need for change here. When I was doing individual therapy, I felt powerless because a lot of times the women are going back to the same system, the same society. I felt like this is where more awareness and advocacy was needed.

CA) You have been an artist longer than an activist. When did you decide to merge the two?

KHAN) I started to think about it when I saw some art in Mexico. Not just in a way where it’s just a picture hanging on a wall. I’m an intense person and I’m a doer. I wanted my art to do something. A lot of the work started with women’s organizations (selling her pieces to help a group or cause). They asked me to donate art and I said ‘If it can help you, yes by all means.’ Then I saw that it had the potential to be an action item, so I started donating to specific groups.  It’s kind of a different way of affecting change, and I hope it inspires other artists to do the same.

CA) You’ve spoken in a variety of formats, in your TED talk, your writing and through your artwork. Is there any medium that is more powerful?

CA) Where do you create your artwork?

KHAN) I used to work at home; I do have a studio in Elgin. Unfortunately right now, I don’t have as much time. Right now I’m working on a series on the seven virtues and seven vices. They illustrate universal themes, as do a lot of my works. I wish I could carve out more than 24-hours in a day. In addition, I’ve really been doing research to start an organization such as an American leadership alliance. Hopefully we can tie in art. (After this interview, Khan informed TCA that she is almost set to launch MALA – The Muslim American Leadership Alliance.)

CA) Do you ever get criticism because you aren’t from Yemen, or wherever a lot of these issues are more prevalent?

KHAN) We are living in a very global society. It’s not a matter of my cause versus other causes. I was born and raised here in America. Did I live in Afghanistan? Did I experience these things? No.  Have I connected with them, yes. I can use my influence and whatever small privileges that I have to help. Along with my advocacy, I’ve worked with survivors of FGM (female genital mutilation) here in Chicago. They want to share their story.

CA) Your painting, “Memoire Collective,” is especially interesting to me because it’s about a cycle of abuse. It reminds me of a recent interview we did with filmmaker Kim Longinotto about her film “Dreamcatcher,” which is basically about breaking the cycle of mental and physical abuse that leads to prostitution in America. What is the key to breaking such cycles?

KHAN) I think you bring up a fascinating point. As children, we are supposed to trust people, but all it takes is that one bad person to get the ball rolling towards bad things. Combatting that is our challenge. What I always try to teach is: A) whatever happens, put it behind you; B) Empower yourself to change your direction; and C) be honest.

CA) In your TED talk, you said painting is not only a way to express your voice, but a way for you to heal. Can you explain what you meant?

KHAN) Yes, it’s a catharsis. It’s also a form of liberation and empowerment because once you get that story out and it’s shared — it’s the human condition. We want our stories out, we want empathy. When that avenue is not allowed, there’s like this internal clogging. When we share our experiences through art, it is empowering.

Below are a couple of Zainab Zeb Khan’s paintings with descriptions by her.

“A family. A generation. A legacy.

Come, let me tell you a story:

Carry it over so others know.

A whisper remains. A shadow is cast.

Struggling to hold on.

A presence which is now a haunting memory.

We come from rich, traditional values and a true history. Everyone has a story. Everyone has a history. Everyone is shaped by these experiences in one way, shape, or form. The majority of places where we, or our parents, or our grandparents immigrated from, stem from deeply rooted cultural roots. Some of us have completely let go. Some of us are burdened, a weight on our shoulders to complete or fulfill long lost dreams that did not belong to us, but were inherited through time. Some of us may find others living vicariously through us. Some of us come from war-torn areas where deeply rooted religious ideologies have oppressed our choices and freedom.

I was deeply inspired by photographs of Afghanistan during the 1950‘s that I came across. Women in skirts, boarding a bus, going to work, going to a university. It is devastatingly drastic in comparison to the Afghanistan that is today: rated the most dangerous place for a woman to be living. The women that are there now cannot imagine a life without poverty, destitution, subjugation, and dependency. This is the now. That was the past. A collective memory. 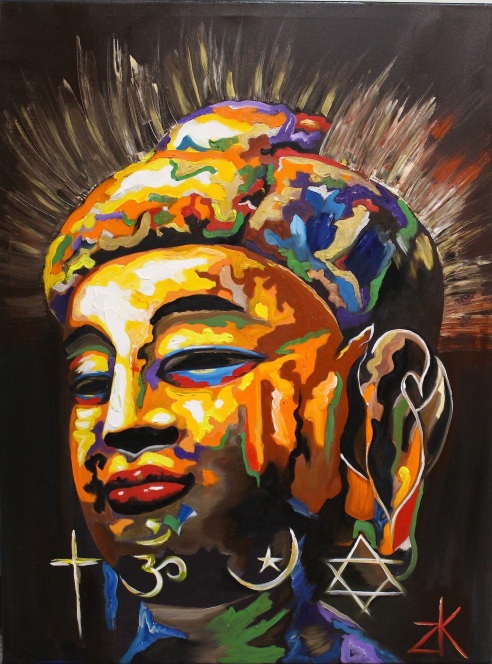 It’s not just its sheer scale or visual image and symbols that have obvious significant meaning. The true symbolism lies within the colors. The dove on the right side by Buddha’s ear represents peace, unity. A holy dove is often the symbol of a messenger.

Yellow –  the complete absence of form and emptiness. The color of humans. Yellow stands for restraint and nourishment. It serves as a symbol of humility and separation from a materialistic society. Therefore it is said to signify renunciation and being the color of earth, it is also a symbol of the equanimity of the earth.

Orange – stands for wisdom, strength and dignity. Orange is a precursor, and it is defined.  Orange is social, our universal need to connect and belong to one another. It is symbolic of transitions.

White – stands for purity and emancipation. White is the combination of the entire color spectrum combined. Order through Chaos. Peace. White serves to remind us that one must experience all the temporary states of being and use collective knowledge and experiences to grasp the idea of enlightenment.

Black- Black symbolizes killing and anger as well as primordial darkness. Many fierce deities are often rendered in black in order to signify the darkness of hate and ignorance as well as the role that these qualities have to play in the awakening of clarity and truth. So while black may symbolize certain evils, understand that these evils must be overcome in order to reach eventual enlightenment. Black is the absence of all colors in a spectrum. In order for light to be made, there must be black.

Gold symbolizes power, strength, and perfection. Gold is also the most precious and malleable metal, which I also associate with humanity.

Silver represents energy, flow, and connectivity. Silver and gold paint weave throughout each color to tie and link separate entities into one unified image.

The combination of these colors symbolizes Truth. Individually, each paint stroke makes no sense. Combined, this painting is the essence of harmony.

Some of Zainab Zeb Khan’s artwork is currently on display at the Conrad Hotel Chicago. In addition to purchase prints with funds going to women’s rights groups, click here.