This was the first year of Riot Fest without its co-founder Sean McKeough who passed away last November at the age of 42, but those left in charge would have made him proud. The fest, which remains the best multi-day music festival in a city with many took place in Douglas Park over the weekend and went off without a hitch.

Overall, there were very few disappointments and the lineup was strong. The weather was unseasonably hot, but it was better than the cold rain which had been known to visit Riot Fest in the past. And it was refreshing to see real music fans rather than a plethora of bros in basketball jerseys and water-filled backpacks that clog other festivals in this city.

Below is a rundown of acts that we covered, along with pictures.

SKATING POLLY: It’s always hard to be the first band of a three-day event, but the Riot-Grrrl inspired trio ate their Wheaties. Considering band founders and step-sisters Kelli Mayo and Peyton Bighorse are only 17 and 22 respectively, expect them to be part of the music scene for a long time.

LIARS: Punk/Electronica bands usually sound best in a small, dark club late at night but Liars was able to turn an afternoon slot in the hot sun into something special. Their inclusion in Riot Fest may be a bit questionable to hardcore punk fans, but the same argument can probably be made for New Order, who do not posses a dark edge like Liars.

X – one of many old-school punk bands in the lineup, X really never disappoints and didn’t this year.

MINISTRY – My expectations weren’t sky-high for Ministry, but they came on as the sun was going down and gave the best performance of the first day. Although there was an active pit close to the stage, I have to wonder if Ministry fans have mellowed a bit in their old age? They rocked, but not one chunk of sod was seen in the sky.

NEW ORDER – Disappointing set by a band of old pros that on this night seemed tired, but putting them in-between Ministry and Nine Inch Nails was perhaps a good break for the crowd.

NINE INCH NAILS – Trent Reznor probably has saved more lives than FEMA and tonight was no exception. A hauntingly good set, but that’s the norm for NIN.

BLACK PISTOL FIRE; This twosome, hailing from Austin via Canada, is more rock than punk, but damn good. They played an inspired set and should be a band to keep an eye on going forward. See our interview with them here.

LA ARMADA: These guys don’t mess around. A short 30-minute set on the smallest stage in the fest was probably a good idea for this Chicago-based Dominican hardcore band — basically the equivalent to a shot of Malort. The pit for these guys was easily the most violent of the fest, with guitars that provided a nice accompaniment. 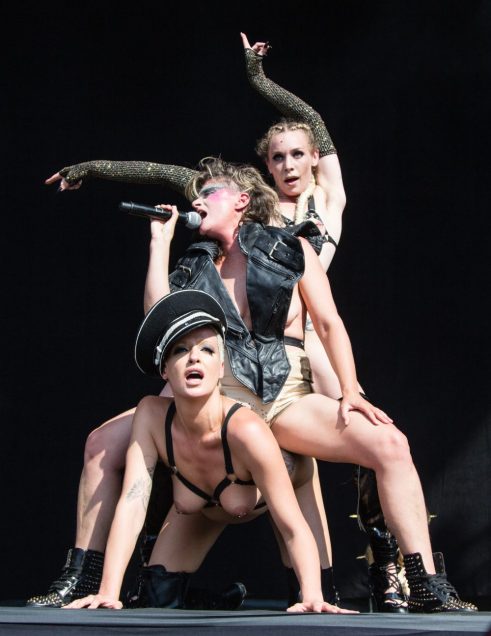 Peaches and her dancers. Photo by Jason Pendleton.

PEACHES: Arguably the best performance of the 3-day fest, it was a shame she was on at 2 p.m. instead of headlining one of the nights. I had to wonder how many late-arrivals missed her artistic, NC-17 set. Surely it will be talked about for years by those lucky enough to have witnessed it.  Peaches, who is as much a performance artist as musician, had a costume change for almost every song, changing as she sang. The fact that she doesn’t come around often made it all the more special.

BAD BRAINS: Probably the most disappointing appearance of the fest. The looked tired, old and sounded the same. It was too bad, as most fans under 40 have only heard stories about the legendary and influential D.C. punk band.

DANZIG: A legend with the Misfits, yet also a legend in his own mind, the crooner came out and made inaudible grunts and yells for the first five minutes that would have made Sly Stallone blush. When he did settle in, he sounded like the Danzig we love and hate, but never stopped making stereotypical heavy metal poses. Yawn.

HOT WATER MUSIC: Out with a new album, Hot Water music is just plain good. It’s a wonder Chuck Ragan can talk, considering how hard he sings, but he must know what he’s doing. Riot Fest was one of two shows HWM played Sunday. See our post-show interview with him here. 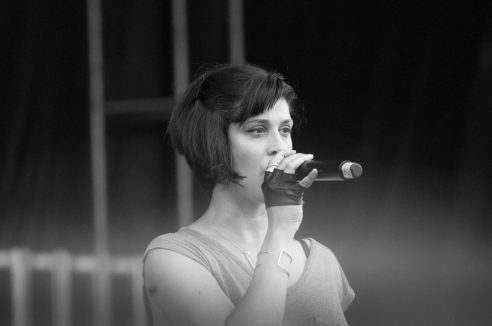 DESSA: She has the vocal chops to be a pop star and the rapping skills to be a rap star, but she’s still largely under the radar, a fact that those familiar with her music love her all more for.  Put on a small stage for a short, 30-minute set, she once again showed why she should be a huge star. The Minneapolis native started her set by going into the crowd and talking for a few minutes before going on stage. Then, she asked if anyone had asthma as she needed an inhaler. She was given one by a fan, and then put on a set that left many short of breath.

CAP’N JAZZ: Chicago punk band performed a sweet set that had their fans in a frenzy. It’s bands like Cap’n Jazz that make Riot Fest what it is.

DINOSAUR JR.: J. Mascis is a freak of nature, one of alt-rocks favorite sons and he showed why on Sunday. Known for playing obscenely loud, the sound was at a loud Riot Fest level rather than the louder, typical Dinosaur Jr. level, but that was probably good for those unfamiliar with them. The choice to play their “You’re Living All Over Me” album was welcomed by fans of the band, but perhaps not the best choice for those who never saw them live. 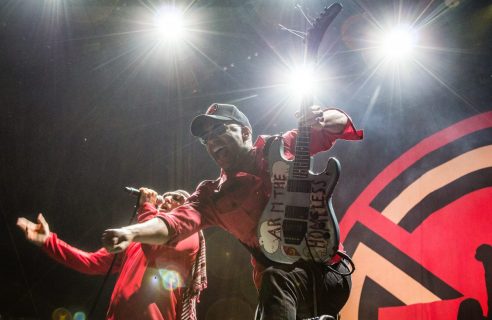 B-Real (on mic) and Tom Morello of Prophets of Rage. Photo by Jason Pendleton.

PROPHETS OF RAGE: The backbone of this supergroup is Tom Morello, (see our pre-show interview with him here) whose guitar work is just sick. Chuck D and B-Real sounded pretty good, performing songs of their just-released self-titled album. They also played a few of Rage Against The Machine’s greatest hits, (along with a handful of PE and Cypress hits) providing the audience with some nostalgia and a reminder that no one sings RATM better than Zack de la Rocha, who unfortunately is not part of the new outfit.

JAWBREAKER: The band most in the audience wanted to see, back together for a reunion show that delivered. It will be hard for Riot Fest organizers to come up with a headliner next year as equally loved, admired and skillful.